We have a current situation going on in our home ….

He has beds, he has crates, he has “his place” and yet he choses the floor. The hard, cold, comfy floor. I’m aware that dogs will chose to sleep on the floor if they find themselves too hot because it is by all rights the coldest place in the house. I have no issue with Atlas sleeping on the floor until it becomes a problem.

I’ve fallen on him, he decided to leap up as I was stepping over him and we both found ourselves in a very awkward  heap on the very cold hard floor. He gets stepped on repeatedly, things get rolled over his tail, things get dropped on him and we constantly trip over him.

If Atlas was a human he would have won an Oscar by now for his amazing dramatic talent, for instance, you accidentally roll an onion over the base of his tail, where, I might add there is no bone just hair and you would have to assume that I’ve just tied his furry poms up with an elastic band. The noise that comes out of him when he thinks he’s in pain has no comparison, this is only turned up by a few hundred decibels when we do accidentally hurt him.

All jokes aside, I then started to notice that he has little calluses forming on his elbows, they don’t seem to hurt him or bother him but I know from previous experience that it is the bodies way of trying to protect the bone. This isn’t something I want really for him if it can be prevented and so the research started.

I came across a raised dog bed. These apparently are fairly common however since I live under a rock Id never heard of them. They stand about 8cm off the ground and have a metal frame covered in a mesh which is fully breathable and keeps the dog cool …. perfect. Also because of the bed being raised it helps with joints and should hopefully relieve the pressure on his elbows from the floor. I duly ordered one, paid for it and it arrived within a couple of days. 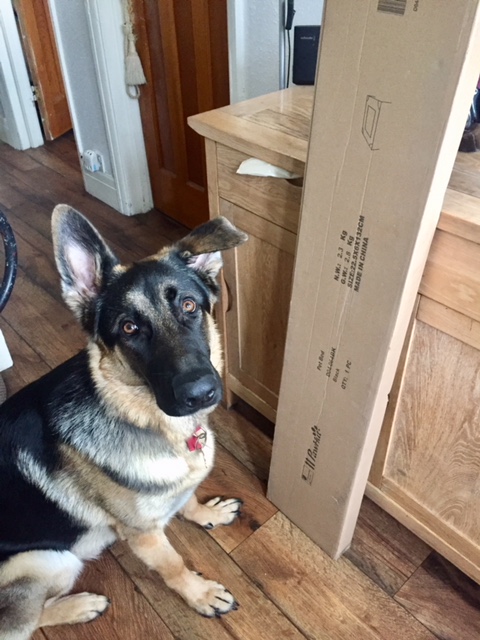 It was really easy to install, simply four screws and an allen key. To be honest I wasn’t quite prepared for how big it was going to be but if it does the trick then we can cope. within ten minutes it had all been put together and Atlas had sat on it no problem.

Perfect, he fits, the bed fits and he likes it, so off I went back to work quite proud of myself thinking I had very easily solved the problem of the lumpy elbows. If you’ve been following this blog you will have come to realise by now that nothing with Atlas is every quite as simple as it should be.

Upon my return home from work, which was essentially two hours since I had left him, I am met with this … 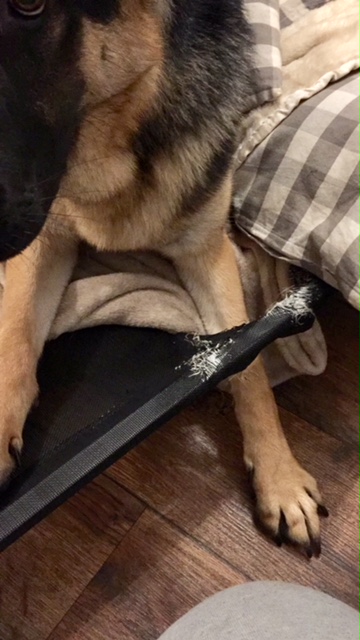 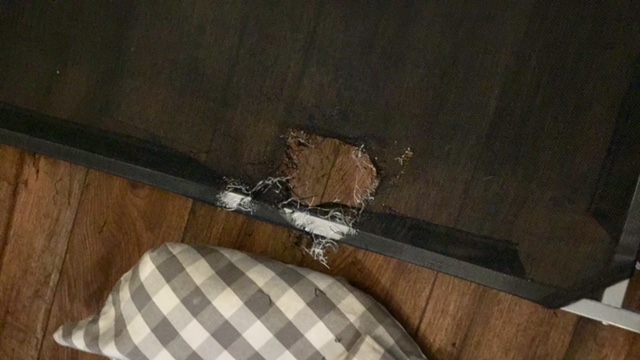 A giant puppy with a giant puppy paw stuck through his brand new raised dog bed because apparently munching on mesh is a good way to pass the time. so note to self … the mesh is strong enough to hold up a 35kg + dog but will easily succumb to munching shark teeth.

We’ve, since decided that for now he will have to live with the hole in his bed and we will just cover it over with his blanket for now. All in all however, apart from the ever growing hole, the bed has been very well received and it has saved him from being stepped on at least 10 times already. hopefully in the long run it will help with his little elbows too …..

Love to you all ❤

Welcome to my profile. I started this blog just to share some of the antics of my very special German Shepherd puppy Atlas. If you imagine the class clown in your school maths class ... you've got him. He is always up to mischief and in turn mortifies me on a daily basis when in public, lets hope he grows out of that ! I hope you enjoy reading about his antics :) View all posts by atlasandus11